Lego has been fuelling the imaginative and creative skills of children (and adults) since 1949. Since then Lego estimates that over 300,000,000 children have built something with Lego bricks – including some of the weird and wacky creations listed here! If you’re keen to attempt a record-breaking Lego construction of your own you’ll find the best deals on Lego and Lego Star Wars sets over at the Dooyoo.co.uk site.

Competition between Lego tower enthusiasts is fierce, with several record-breaking attempts made almost every month. Records have been set all over the world, from Germany, to Chile, Denmark, Japan, Russia and Israel. The current record holders hail from Sao Paulo, Brazil. Their record was set in April 2011 with over 6000 participants of all ages working together to build a huge 31.16 m tower using 500,000 Lego pieces.

This new record was set in October 2011 at the Model Building Fair in Ried, Austria. With a train track spanning a phenomenal 1190.88 m, it took the train 44 minutes to complete a full circuit of the track!

The Lego Star Wars range is the most popular Lego range in America, and inspired ingenious Lego artist Nathan Sawaya to create a full-scale replica of Han Solo trapped in carbonite, a famous scene from the original Star Wars movie. Taking more than 3 months to complete, Nathan used over 10,000 Lego pieces to create his astonishing masterpiece. 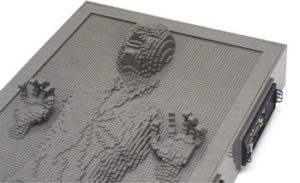 This incredible feat of ingenuity and design was constructed entirely from (over 100,000) Lego parts, including the keyboard, plectra, soundboard, bridge, hitch pins, tuning pins, wrest plank, nut, case, legs, lid and music stand. A fully functioning harpsichord, the only parts not created from Lego are the wire harpsichord strings. It took designer Henry Lim more than two years of puzzling, theorising, building and rebuilding to create a Lego masterpiece that weighs in at 150 lb and has a range of 61 notes. Want to hear the Lego harpsichord at work? You can listen to a sample here http://www.oddmusic.com/gallery/om21250.html.

One of the most impressive Lego constructions in history, this remarkable shiny, stripy, two-storey full size home was constructed by a team of over 1200 volunteers. Using a staggering 3.3 million Lego pieces, and not one single drop of glue, the house in Surrey, England was completed in just over a month. Featuring a working toilet, shower and sink, and complete with Lego furniture, Lego kitchen appliances, a Lego stained glass window and even a Lego cat, the house was created for James May’s Toy Stories TV series in 2009.