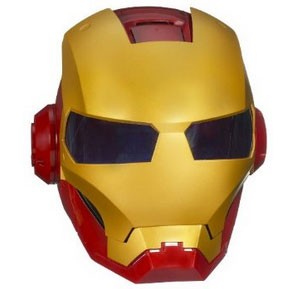 Iron Man is back with a second movie in the series! Ok, so personally, I find it difficult to relate to this guy. Something about this mask seems, well, impersonal, I guess. If I didn’t know better, I’d say the guy looks evil. Still, my kids do know better and they’re big fans of Iron Man.

At their tender ages of six and eight, we don’t allow watching the Iron Man cinematic productions, but they are well versed in the animated version. If you know a kid who feels the same about this metallic hero, now’s a great time to get them a special gift, as there’s a variety of new Iron Man Toys

Take the Iron Man helmet shown above, for example. It’s not just a mask. This is a super gadget by Hasbro that can light up, talk and execute various “battle sounds”. Pretty cool stuff. It’s new on the shelves, so not something that every other kid in school already has, and there’s even a discount in Amazon right now for this product.

Check out the other new Iron Man 2 toys available – cool and brand new!