Barbie dolls are often criticized for presenting little girls with the “wrong” body image and setting unachievable and unrealistic standards for the next generation of women. Personally, I believe these standards are thrown at us women from every possible angle in the media. In fact, Barbie dolls may be too “artificial” to actually be perceived as something you want to look like.

I only have boys, with an impressive record of doll annihilation feats, so I can’t say they’re affected either way. I do believe that if I had a little girl, I would be talking to her about these issues at some point, but would still allow her to enjoy Barbie dolls – after all, I enjoyed them myself as a little girl, and I don’t think any harm was done.
Whew, long preface for a post recommending a couple of pretty dolls!

Mattel has two really pretty dolls, very fancy and festive. A great choice for a gift for the holidays, for any little girl with a Barbie collection. These are collector’s editions, released especially for the holidays. There’s one for each year, and this one is the 2008 Holidays Barbie: 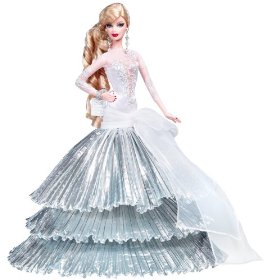 For a girl that just wants a pretty Holidays Barbie and doesn’t need the latest collector’s edition, the 2007 Holiday Barbie is still available and the price is quite attractive too: 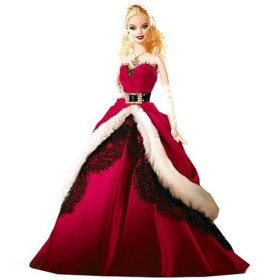 Or, for an extra festive holiday, or perhaps for two little girls, these two dolls can make a dazzling pair!